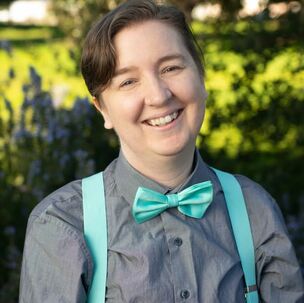 ​
WRITER,
PERFORMER,
EDUCATOR,
​ARTIVIST.
LD Green is an artivist: a non-binary writer, performer, college educator, and mental health advocate living in Oakland, California.  Their work has been published on Salon, The Body is Not an Apology, Sinister Wisdom, PULP, Foglifter, sPARKLE + bLINK, on truth-out.org and elsewhere.  They co-edited (with Kelechi Ubozoh) and contributed to the anthology We’ve Been Too Patient: Voices from Radical Mental Health, published by North Atlantic Books in 2019.  They have featured at dozens of reading series, slams, showcases, and workshops in schools, colleges, and open mics locally and across the country.  As a playwright and writer/performer, they have had their work performed at multiple local and national theater festivals including the National Queer Arts Festival three times as well as the San Francisco Fringe Festival.  LD received their BA from Vassar College and their MFA from Mills College in Creative Writing.  They were a 2010 Lambda Literary Fellow in Fiction.  They attended Tin House Writers’ Workshop in 2012 and were a Catwalk Artist in Residence in 2013.  LD is Assistant Professor of English at Los Medanos College in Pittsburg, California where they teach composition, creative writing, and literature.

We've Been Too Patient: Voices from Radical Mental Health